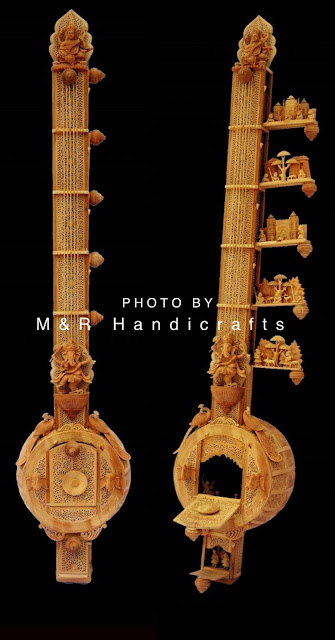 
The Story of SITAR on Great Musician Mia Tansen.
Mia Tansen (born 1493 or 1506 – died 1586 or 1589  was a prominent Hindustani classical music composer and musician. He was an extraordinarily gifted vocalist, known for a large number of compositions, and also an instrumentalist who popularized and improved the plucked rabab (of Central Asian origin). He was among the Navaratnas (nine jewels) at the court of the Mughal Emperor Akbar. Akbar gave him the title Miyan (an honorific, meaning learned man). His contribution to the world of music is priceless and is still worshiped by leading singers and composers of the world. He is believed to be the father of Indo-Pakistani Music.
About Sandalwood:
Sandalwood is a class of woods from trees in the genus Santalum. The woods are heavy, yellow, and fine-grained, and unlike many other aromatic woods, they retain their fragrance for decades. Santalum album, or Indian sandalwood, is a small tropical tree, and is the most commonly known source of sandalwood. Indian sandalwood is very sacred in the Hindu Ayurveda and is known in Sanskrit as vhandana. In Hinduism and Ayurveda, sandalwood is thought to bring one closer to the divine. Thus, it is one of the most used holy elements in Hindu and Vedic societies.
(Click her To watch Small Sitar Video with 3 Scenes in handle )

* Questions about your order?
Do not hesitate to contact us at any time with any questions: about payment, delivery or anything else.
Contact The Artist:
Mohit Jangid Artist (moohitjangid@yahoo.com)
Back to blog