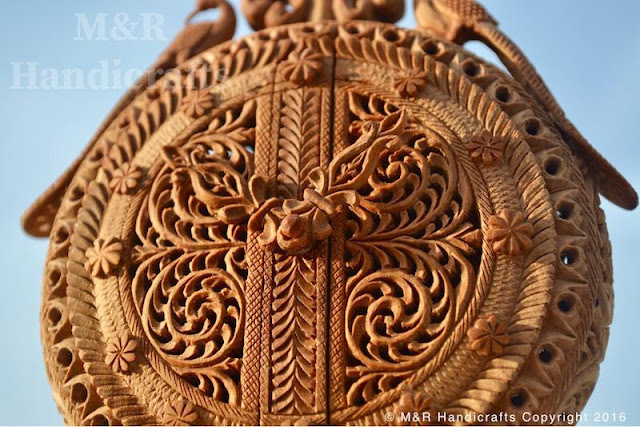 Sandalwood Carved Decorative Opening Pocket Watch
This Sandal Wood Carved POCKET WATCH opens up into a weighing scale with the TAJ MAHAL nestling on one arm and the RED FORT on the other. They in turn lift to reveal more masterpieces. This is An Total Hand Carved piece With Indian Traditional Miniature Carving Design For INDIA.
What is Pocket Watch?
The Pocket Watch is a watch that is made to be carried in a pocket, as opposed to a wristwatch, which is strapped to the wrist. They were the most common type of watch from their development in the 16th century until wrist watches became popular after World War. Pocket watches generally have an attached chain to allow them to be secured to a waistcoat, lapel or belt loop, and to prevent them from being dropped. 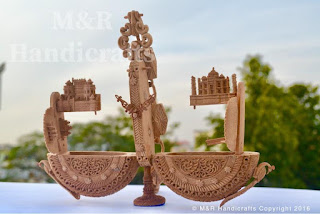 About Sandalwood:
Sandalwood is a class of woods from trees in the genus Santalum. The woods are heavy, yellow, and fine-grained, and unlike many other aromatic woods, they retain their fragrance for decades. Santalum album, or Indian sandalwood, is a small tropical tree, and is the most commonly known source of sandalwood. Indian sandalwood is very sacred in the Hindu Ayurveda and is known in Sanskrit as vhandana. In Hinduism and Ayurveda, sandalwood is thought to bring one closer to the divine. Thus, it is one of the most used holy elements in Hindu and Vedic societies.

* Questions about your order?
Do not hesitate to contact us at any time with any questions: about payment, delivery or anything else.
Contact The Artist:
Mohit Jangid Artist (moohitjangid@yahoo.com)
Back to blog